Do High Net Worth Individuals Still Drive Political Contributions in 2022?

Part 1: The National Landscape and Trends Across the Country

Ever since 2016, politics has continued to attract more national attention with much more posturing from both Democrats and Republicans. Even before former President Trump entered politics, political fundraising was dramatically increasing, highlighted by former President Obama’s incredible fundraising records set in 2008. Midterms usually do not garner as much attention or contributions; however, 2018 bucked this trend, surpassing the presidential election cycle of 2016. In 2020, fundraising shattered all historical norms as contributions dramatically surpassed records for both parties.

Why does this matter? Since 2000, we have seen that candidates who spend the most win 70%+ of the time, regardless of the House or the Senate. In fact, the top 50 individual donors donated more than $1 billion in 2022. As of late November 2022, the midterm elections are mostly behind us, with some race results still unresolved. Candidates who outspent their opponent surpassed 90% for the first time in both chambers, with one Senate race still unresolved.

Windfall is a people intelligence and AI company that helps more than 800+ organizations become more data-driven. Given our unique data perspective, we wanted to tackle (1) how fundraising evolved over the last several election cycles and (2) where this money is coming from. We have previously written about similar trends in the 2018 and 2020 election cycle; however, for this cycle, we wanted to break this into a three-part series that focuses on:

For Windfall’s analysis, the underlying data in these posts are filtered for individual contributions made directly to candidates, parties, and committees linked to candidates reported through October 31, 2022. Contributions from organizations, as well as donations made to unaffiliated PACs, were excluded.

We will be focusing on #1 for this blog post with the additional analyses coming out over the next few days.

As indicated earlier, political contributions have ballooned over the past 4 years. To help us gain a foundation of understanding the overall landscape, we look holistically at all individual contributions over the past 15 years. As expected, this analysis demonstrates a consistent trend of growing contributions peaking as we get closer to Election Day in November.

Total Donations by All Parties

As we wrote in our 2020 analysis, 2018 stands out as an anomaly across midterm election cycles. 2018 saw similar fundraising thresholds as presidential elections in 2008 and 2012, and even surpassed 2016 contributions. This has been attributed to “the Trump effect,” which characterizes a supercharged political environment since early in Donald Trump’s presidency. In 2020, we can see just how much this effect dwarfed historical elections.

As a reminder, as we look to 2022, our data goes through October. We will, if historical trends persist, see individual contributions catapult through November as with the last 7 election cycles. If we just look at an apples-to-apples comparison of January through October of 2018 versus 2022, we can see some of the underlying shifts. Specifically, during that same time period, 2022 political contributions have increased nearly 69%, while the number of individual donors has actually decreased by ~17%. This means fewer donors are contributing much higher amounts, which signals that the political climate remains heightened even under the Biden Administration.

While the analysis above focused on all parties, we wanted to zoom in on the two major parties in the United States: Democrats and Republicans. Since both parties receive the majority of the contributions, the trend remains, although showcasing that the majority of fundraising over the past 3 cycles favors Democrats over Republicans.

Just by looking at these trends, it seems like the escalation of political contributions is here to stay with 2022 approaching record-breaking midterm fundraising totals for both parties. Were there more races to contribute to? Was this driving the overall contributions? Windfall looked into high-profile Senate races, and in fact, there were the same number of seats (35) available in both 2018 and 2022. That being said, these races are for different candidates and we’ll explore the impact on battleground states later in this series.

Midterm elections are particularly interesting in that all candidates running represent constituents of a particular state/district, versus presidential candidates who will represent the entire nation. That being said, those candidates in “purple” states at times can outweigh their influence, especially with razor-thin margins in Congress. Whether it is in battleground states or battleground races, candidates can draw from a larger national donor base to bolster their efforts.

Windfall first analyzed the total dollars that states received from across state borders, regardless of political party. Some states like Georgia, Pennsylvania, and Nevada received some of the highest contributions, which showcase their importance in the overall election cycle. That being said, California, somewhat surprisingly, is also one of the largest recipients of out-of-state contributions. 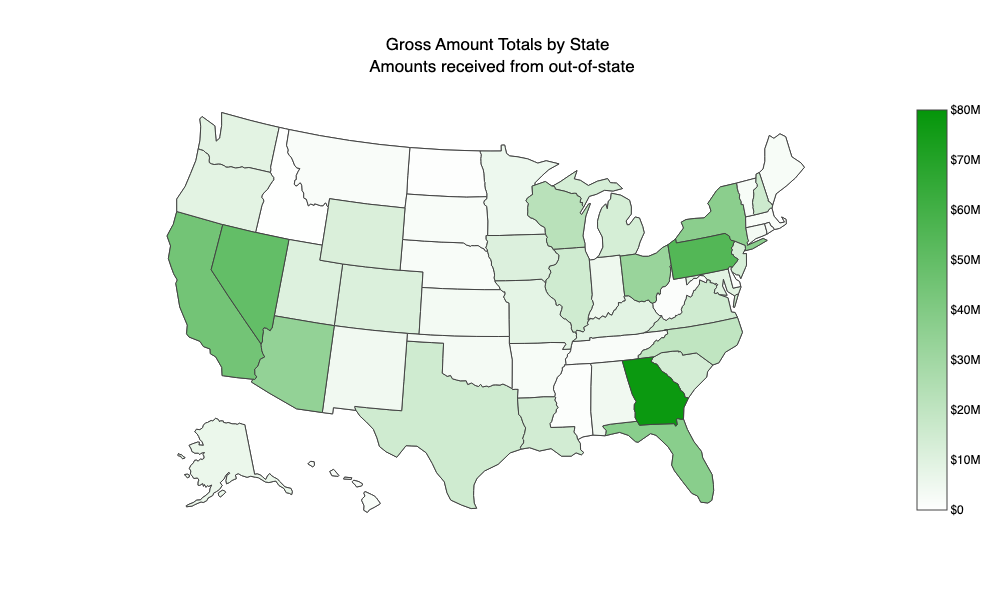 Of course, California is one of the most populous states with the most races in the country and also houses two of the top fundraising politicians: Nancy Pelosi (D) and Kevin McCarthy (R). So while that may make sense on the surface, Windfall wanted to understand a bit more about how out-of-state dollars may have impacted local constituent fundraising. To analyze this, we looked at the ratio of out-of-state contributions versus in-state contributions.

What About Republicans and Democrats? 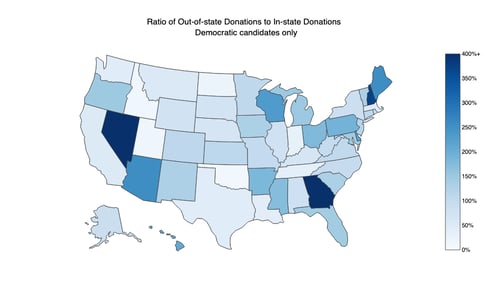 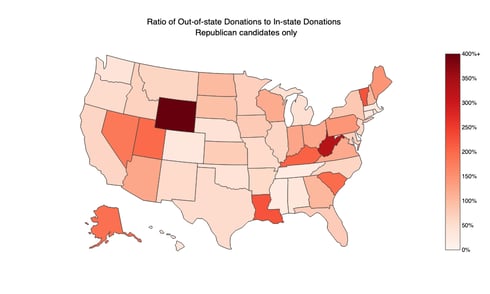 On the surface, it looks fairly similar with Georgia still being one of the hotly contested states for both parties. That being said, it is interesting to point out how some donors were attracted to certain states like Florida, where Republicans saw an influx of out-of-state donors most likely supporting Governor Ron DeSantis’ reelection.

If we look closely though, we can see that most states are seeing much more balance of out-of-state donors. The graphs do not significantly highlight the key battleground states, thus showing that the dollars are being donated disproportionately by donors.

To understand who is providing these contributions and their influence across state lines, we wanted to take a closer look at high net worth donors in this election cycle. We’ll be tackling this topic in our next blog post. In the meantime, subscribe to our blog for future data-driven insights of interest today!

If you’d like to learn more about how Windfall’s understanding of people data can take your organization to the next level, please reach out to the Windfall team.

Sources & Footnotes:
(1): OpenSecrets.org: Did Money Win? Accessed on November 24, 2022.
(2): The Washington Post: Meet the Mega Donors Pumping Millions into the 2022 Midterms. Accessed October 29, 2022.
(3) FEC reporting does have delays in reporting all contributions through this date.

For Nonprofit Teams 5 Key Components to a Successful Annual Fundraiser