Following up on our last post on how High Net Worth (“HNW”) individuals are impacting political contributions, Windfall wanted to zoom in on some specific key battleground races. We are actually publishing this post on the day of the run-off for Georgia’s second Senate seat between Raphael Warnock (D) and Herschel Walker (R). As a quick refresher, Windfall has an expansive people-data asset to help understand the influence of individual contributions on political outcomes.

Thus far in this series, we have looked at the national landscape and trends across the country - including how political contributions have escalated over previous years. We’ve also analyzed how HNW donors have an outsized impact on political outcomes through their political contributions. Specifically, in our last post, we saw trends in how out-of-state donors are pouring dollars into states with contentious races. In this final installment, Windfall wanted to dig in deeper into these races and determine how larger contributions may have influenced the outcome of the election.

As in the previous two posts, the underlying data used in these calculations is filtered to individual contributions made directly to candidates, parties, and committees linked to candidates reported through October 31, 2022 (4). Contributions from organizations, as well as donations made to unaffiliated PACs, are excluded.

With close margins for Republicans and Democrats in the House and Senate, states with tight races had the potential to make a big impact on which party controlled Congress. In 2022, we selected 4  tightly-contested “toss-up” states: Arizona, Pennsylvania, Nevada, and Georgia.

In the table above, we can see that in the months leading up to the 2022 election, these 4 states brought in over 9x contributions compared to the same timeframe for the previous 2018 midterm election. Georgia actually saw a ~19x increase, which highlights how the state has become more purple over the last 4 years. In each of these states, we also observed a higher percentage of both HNW donors and those contributing across state lines. This signals that election results in these states were of utmost importance to citizens regardless of where they lived.

While all of these toss-up states are interesting to follow, we turn our attention to dive more deeply into the story in Georgia. The election for Senator in Georgia is of particular interest right now, as there is still no clear winner at the time of writing - despite general Election Day being a few weeks behind us.

In some states, including Georgia, a majority (50%+) is required to declare a winner of the election. Libertarian candidate Chase Oliver won 2.1% of the votes, leaving Raphael Warnock, the Democratic incumbent, and Herschel Walker, the Republican challenger, each with less than 50% of the vote. Given that margins are paper-thin in the Senate after this election, with 49 seats held by Republicans and 50 by the Democratic caucus, this final seat is still a heated battle.

A winner will be decided in a run-off between Warnock and Walker through a special election on December 6, 2022. While the election will be decided shortly, Windfall wanted to understand any patterns or trends in contributions that could have influenced the outcome of the race.

As a first step, we wanted to look at Georgia constituents and their contributions to various parties. As expected, more donations come from highly-populated areas, such as counties near Atlanta, Savannah, and Augusta. However, due to the importance of this race, we can see in the table above that the bulk of donations (over 84%) given to Georgia candidates came from out-of-state donors.

Donations in Support of Warnock vs. Walker

The donations within the state were not split evenly between candidates. Senator Warnock received approximately 3x as many donations as Herschel Walker. Given that Warnock is the more well-known incumbent, he got a head-start on Walker, who won the Republican primaries held in May of 2022. This is consistent with expectations as we generally observe incumbents receive more funding than their challengers. Warnock’s total donations also rose more quickly than Walker’s, which is consistent with the finding from our first blog post that Democrats have received more funding from individual donors in recent years. 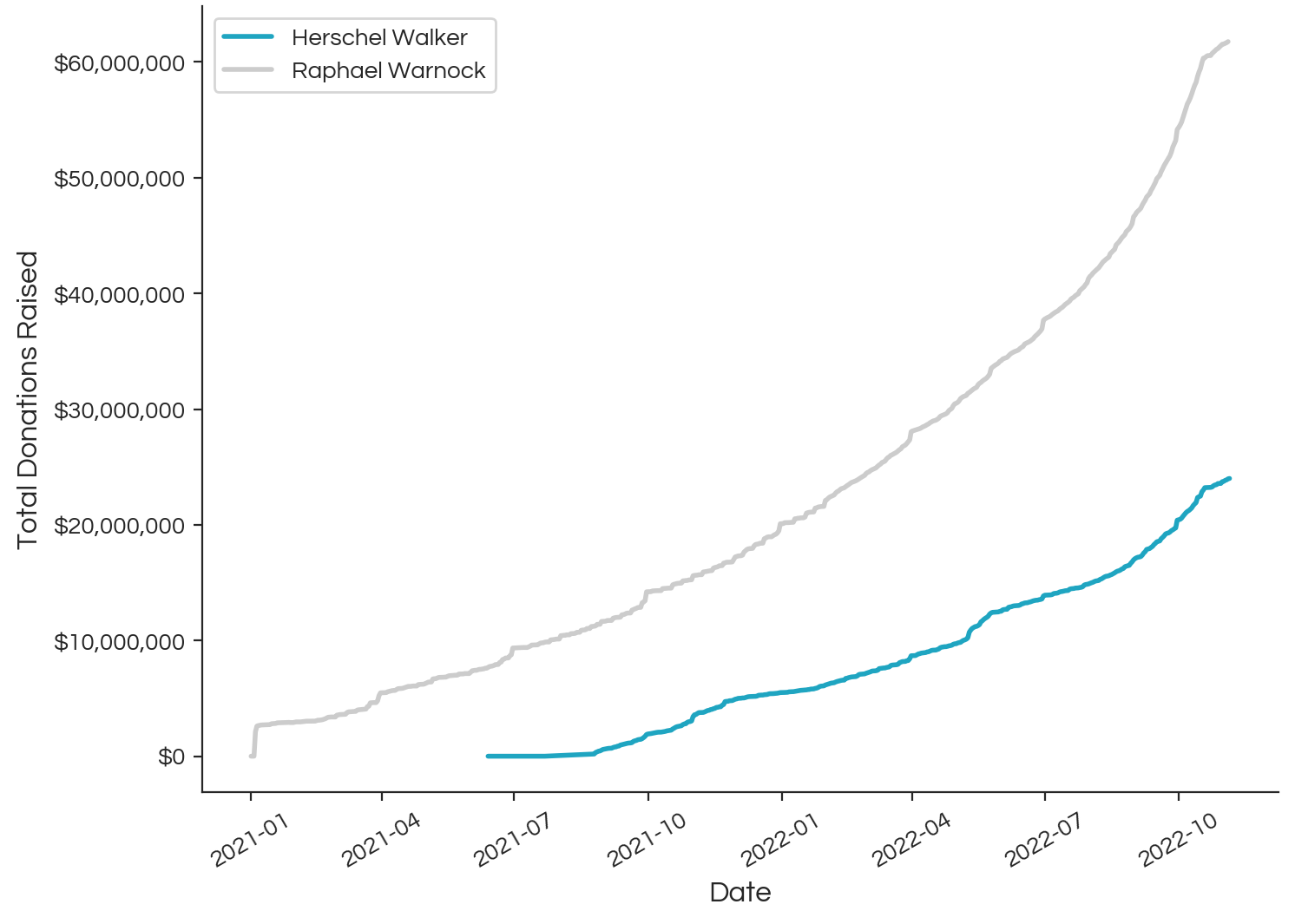 Both candidates saw similar trends in the types of donors contributing to their campaigns. Those from out-of-state contributed more to both campaigns than those from in-state, with a step change in velocity taking place around the time of the primaries. Specifically, as Walker won the nomination in May, we can see that the race started to attract national attention and a heightened fundraising climate.

Interestingly, the bulk of total donations to both candidates also came from HNW donors. Interestingly, we do not see the impact of HNW donors until after Walker won the Republican primary. As the race continued to garner public attention, we can see that more influential donors started to flex their contribution muscles. 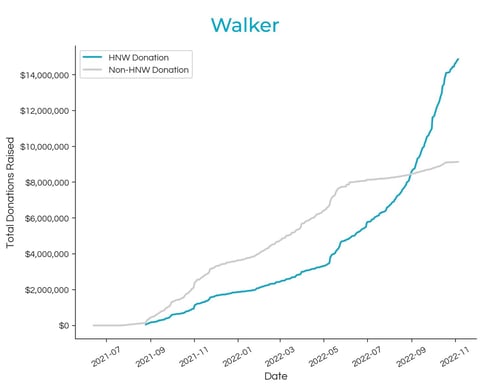 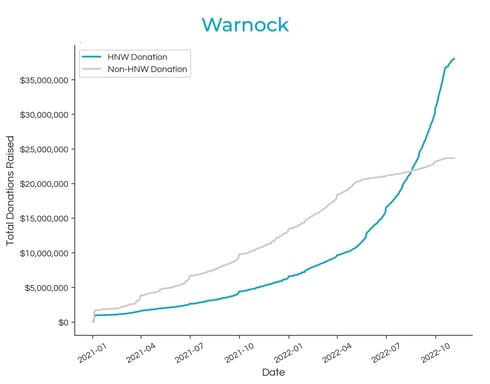 Two years ago, Senator Warnock was in a similar position, where he found himself in a runoff with Kelly Loeffler after receiving only 32.9% of the vote in the first round of elections, spurred by the resignation of Senator Johnny Isakson in late 2019. Special elections in Georgia forgo a primary, resulting in fewer votes for each of several candidates on the ballot. Comparing Warnock’s position in 2020 to 2022 is interesting to see if we can glean any patterns.

While both Walker and Warnock raised money consistently for the months leading up to the first round elections in 2022, both Loeffler and Warnock raised very little until much closer to Election Day in 2020. Once it became clear that party control of the Senate could switch with both Georgia Senate seats up for re-election, as well as the tie-breaking vice-presidential vote, political contributions ramped up quickly. Once donations started coming in with higher velocity, they continued at a similar rate until the run-off was decided in early 2021.

Similarly to the Walker-Warnock race, the vast majority of donations made to both Loeffler & Warnock two years ago were from out-of-state contributors. However, in 2020 these contributions didn’t start adding up until much closer to Election Day, whereas in 2022 fundraising and donations started much earlier. Given the lack of a primary election for this Senate seat in 2020, this lagging donation total makes sense as the top two candidates became clearer. 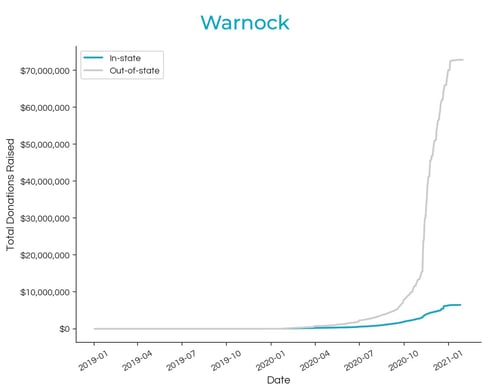 In the run-off, it is also interesting to see that while Warnock outraised Loeffler, the contributions were driven by lower net worth households. This is different from what we observed in 2022 where HNW donors were clearly dominating political contributions. That being said, Warnock still enjoyed a much larger proportion of HNW donations compared to Loeffler. 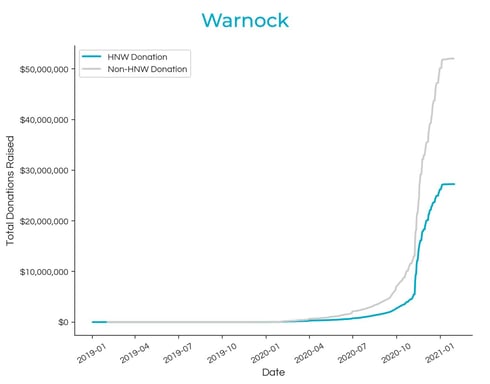 Over the course of this three-part series, we have observed some interesting insights about how individual donors over the past several election cycles. Specifically, we dug into:

We’ve seen that the political atmosphere, which ramped up leading up to and continuing under the Trump administration, continues to escalate under Biden’s presidency. Additionally, a higher percentage of these donations are coming from out-of-state donors as well as those from HNW households. These donations are making a meaningful difference in key swing states, such as Nevada, Pennsylvania, Arizona, and Georgia - with the full effects in Georgia yet to be seen.

If these findings have been of interest to you, please subscribe to our blog and reach out to the Windfall team to understand how our people data and insights can help your organization reach its goals.

Sources & Footnotes:
4)FEC reporting does have delays in reporting all contributions through this date.

Arup Banerjee September 03, 2020 • 4 min read
For Nonprofit Teams The State of Consumer Wealth & How to Engage with High-Net-Worth Individuals